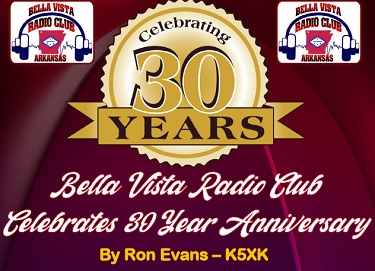 Its history has very humble beginnings, largely with former members from the now-defunct Northwest Arkansas Amateur Radio Club which met in Springdale. Prior to the mid-90s, the NWA ARC operated several area repeaters, including ‘the 147.030 machine,’ located on the London Water Tower in Bella Vista.

Bill Davidson – WØJLY, long time member and now a Silent Key, in his recollections of this history of the club, said that maintenance and support for the .030 repeater from the NWA Club “always seemed to be lacking.” As leadership changed, interest diminished in the club’s sole Benton County repeater. Bill found himself all alone in trying to keep the machine on the air.

Looking for a more reliable option, Bella Vista retiree John Hansen – AB5UN formed the fledgling Bella Vista ‘Repeater Group’ with sixty supporters from Rogers, Bentonville and Bella Vista. $3,000 was raised and a new repeater was soon launched on 147.255 MHz, located on one of the POA’s many water towers. The Repeater Group was off and running. Its first president, Bill Wright – KC5GN (SK), was a good administrator and soon secured non-profit status for the club.

One of the new club recruits was then Benton County deputy sheriff Ken Farmer – KD5UFY. Hugh – WAØTDQ, remembers that Ken would stop by WØJLY’s after work, for CW practice. Ken eventually became Bella Vista Chief of Police and club Repeater Trustee. After Ken’s retirement in 2016, Fred Lemley – K5QBX, was appointed repeater trustee. And when it became apparent the repeater needed to be relocated, Fred temporarily hosted the repeater at his QTH while an extensive search was made for a new permanent site. The solution was found in 2017, when the repeater was relocated to the K5SRS commercial tower just north of the AR/MO state line, across from the Jane, MO Walmart.

WØJLY remembers Repeater Group meetings were informal and held at area restaurants. He recalls only one Field Day during the early years. Under the presidency of Bob Femrite – KØSNG, the club resumed Field Day participation, generating a large number of contacts and high scores from portable stations operating CW, SSB, and Digital modes. Under the 2018 guidance of K5QBX, the tradition of demonstrating emergency communications capability during ARRL Field Day was revitalized.

Under the leadership of Ken Mummery – K6RLA, the club voted in 2016 to change its name to Bella Vista Radio Club, reflecting members’ expanded interest in all areas of the hobby. In 2017, the club was rewarded by efforts of members Bob McIntire – AC5LX (SK), and Walt Gaspord – AF5XY (SK), as meetings were moved to new spacious facilities at the Highland Christian Church. WØJLY was recognized as ‘Member Emeritus.’ The first ‘Ham of the Year’ was awarded to Steve Werner, K5SAW, for his many contributions of time and technical expertise to area hams.

Also in 2017, Glenn Kilpatrick, WB5L, organized a new Volunteer Exam team. Later that year, Glenn was elected president. Meetings were moved to evening hours, and  in 2018 “The Signal,” a new monthly newsletter edited by Don

Banta – K5DB was launched. Glenn vastly improved the club website with new areas and aesthetic improvements. These efforts resulted in significant growth in membership. Today, the club is a diverse group of almost 200 licensed and prospective radio amateurs with varied interests. Membership is spread across Benton, Carroll, Madison, Washington, Sebastian, McDonald, and Delaware counties in Arkansas, Missouri, and Oklahoma. Informally, the club is now referred to as the Bella Vista area Radio Club.

We salute Bill, John, Hugh, Bob, and so many other former members whose contributions we enjoy to this day.

To commemorate this milestone in BVRC’s existence and operation, we have these thoughts from past and present BVRC officers:

Mark Whittlesey – WØKYZ, Treasurer: “The growth of the club over the past few years has been nothing short of astounding. At times it could be a real challenge for me to keep up with all the new membership forms, dues payments, the flood of emails, and recording ALL the information that went along with it. But seeing the club grow and the renewed interest in ham radio made it worthwhile. Sometimes, rapid growth can lead to the rapid rise of problems. Couple that with the Covid epidemic and the loss of our normal meeting location and you have the perfect storm. But the leadership has done an exemplary job of dealing with these problems as they have arisen. So we have a good history of leadership to help point us in the right direction for the future.

Much instruction and guidance is needed for many of our new hams to help them hit the ground running. We don’t want to let new hams get frustrated with getting started and lose interest. So as many members as possible should step up to help with this. Some of this is already going on, but often we hear about this indirectly. Don – K5DB covers some of this in the newsletter. Reporting on this during the meetings would be helpful as well and would tend to encourage discussion and participation to foster more help for new hams. Having shack visits and allowing supervised operation as well as encouraging any new hams to take advantage of the SDR’s scattered over the world to just listen on the bands should help jump-start them, and keep the interest levels high.”

Don Banta – K5DB, past VP, Signal Newsletter Editor: “BVRC reaches a historic moment in 2023, as we celebrate our 30th year. BVRC was incorporated on March 17, 1993, originally as the Bella Vista Repeater Group (BVRG). The above anniversary logo will appear on the banner of THE SIGNAL for each issue of 2023 and will also appear on BVRC’s website, to ensure that anyone reading SIGNAL issues or viewing the website will be made aware of this great accomplishment.

Since its founding, BVRC has maintained a top-notch level of providing informative monthly programs, helps (elmering), and activities to aid in enabling new and veteran hams alike in increasing their enjoyment of our great hobby. We continue to do that today, which has resulted in BVRC becoming the largest ham club in the state. This type of growth just doesn’t “happen”. Yes, the elected club officers and appointed chairpersons and coordinators do their part with programs and activities, but it is the “unsung heros” – YOU THE MEMBERS – who actually cause a phenomenon such as this to occur. THANK YOU ALL SO VERY MUCH.

As we announce the various club events this coming year to celebrate this milestone in BVRC’s history, be sure and mark your calendar to get involved with some – or all – of them!”

Jan Hagan – WB5JAN, President: “All special interest clubs like our own Bella Vista area Radio Club don’t enjoy the longevity our club has had over the past 30 years without three things being present as part of the culture of the club.

Second, an open and welcoming spirit – BVRC activities are open to all radio amateurs in the Northwest Arkansas region and beyond. And, while we hope our fellow amateurs will find value in our club membership, we welcome all amateurs to explore the hobby in all its facets with us.

Third, an involved and active membership – Whether attending club meetings or programs, participating in club activities and events, or joining our community on our various HF and VHF nets, it is the involvement of our members that makes our club sustainable.

In the future, I am hopeful that we will have a special club program “telling the story” of our club from the beginning right up to the present. I am certain you will be as fascinated as I with the journey our club has taken to get to today with all of you as members!”

Ron Evans - K5XK - Ron is a retired communications professional with a radio and television reporting, and marketing background.

Look for us on APRS

For more info, contact us at our Club Email.